Rush job because I was trying to get files organized and it took a lot longer than I expected, plus I was distracted by people on the Les Mis Discord server. Not much news today anyway besides Adam presenting research at his internship: laundry, article, cats, bunnies (including a new-to-me bunny in front of my former junior high school), one Machamp and two Zapdos raids within a mile and a half of my house (1+ 1- on catching the Zapdos but I have three now and that's good enough for me).

My father came over in the afternoon because his printer was broken and he needed to borrow mine, and we had dinner with Adam and my parents plus watched the beginning of the Washington-Baltimore preseason football game which the Ravens ultimately won, though they also pre-empted part two of The Story of Diana on ABC and delayed Weekend Update on NBC, since each team takes over one channel! Here are some hibiscus to brighten your summer: 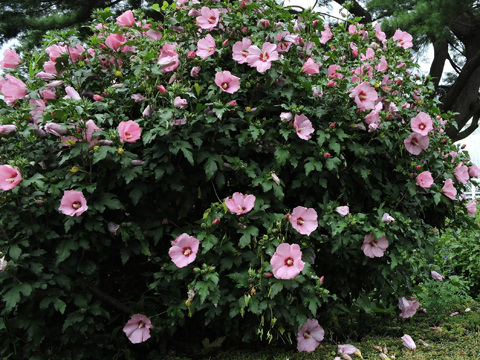