We had some excitement on our first day back from California, but not the good kind. We came back to find that the disposal in our kitchen sink was apparently not working -- water was backing up into the sink and spurting out of it when we turned it off after using it. The good news turned out to be that nothing was wrong with the disposal itself, but something plastic had become wedged inside the pipe connecting it to the sewer line below, which was also making the basement laundry sink back up. So several snakings later, everything is working, but between the emergency weekend fee and the lingering terrible smell in the house, it does not feel like much of a victory.

Otherwise, our day was about laundry, unpacking, sorting random items acquired while traveling (sea shells, wedding popcorn, Paramount Pictures guest passes), and trying to catch up on email and various computer chores. Adam went walking with a friend in the morning, napped till lunchtime, and worked on an NIH project that will continue into school year. My parents came over for pizza and to see trip photos, then son went out for milkshakes with a friend from high school and Paul and I watched the beginning of the fourth season of Endeavour. Speaking of trip photos, here are some of the Star Trek-connected places at Paramount Studios, which thankfully is not pushing Discovery at all: 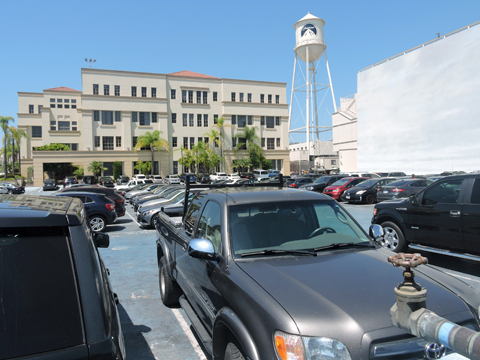