Adam has been delivered to College Park for his junior year. Technically, he has enough credits to be a senior and could graduate this spring, but since he started out in the business school, he had first-year computer science to study as a sophomore, and now he's doing honors in both that and math, so it is going to take him at least one extra semester (which is not a problem because he has a scholarship). He spent most of the day getting his books, laundry, bike, and other things ready, with a break so we could go meet Paul for lunch at his office cafeteria.

Adam and I watched The Mummy while he packed, then Paul arrived home with Adam's high school friend Arvin, who needed a ride to College Park. We all dropped off the car because it has an appointment to be serviced tomorrow, went to Plaza Azteca for a quick dinner, stopped at Shoppers Food Warehouse so Adam could stock up for the semester, dropped Arvin off at his apartment, and took Adam to help unpack before giving him a lift to a party across campus. Now we're home with post-travel chores to finish. Here is the outside of the Mission San Luis Obispo de Tolosa: 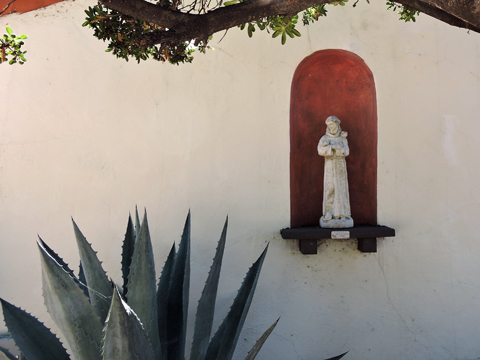