We spent Sunday in Richmond with Cheryl, meeting first at Three Lakes Park, where we brought picnic food and walked around to see the turtles and skinks. Then we met Lin at Lewis Ginter Botanical Garden, which has both the Butterflies Live exhibit in the conservatory and Wild Art, a display of nature-inspired and created installations like "Earth Healer" and "Turtle Island" in the photos below. The gardens were also having a Late Summer Lawn Party with music, tours of Bloemendaal House, and displays of costumes and early bicycles. 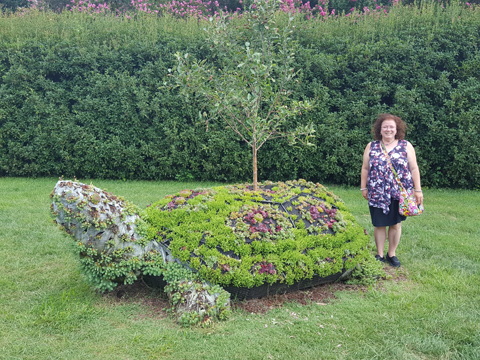 We went to dinner with Cheryl at River City Diner (I had breakfast food, which is about all my stomach can handle after a week of vacation and a week of end-of-summer meals out), then we drove home in moderate traffic in time to stop for kitty litter before putting the trash out and watching Endeavour, which has been excellent this season and clearly aiming for modern relevance despite the pre-Morse setting. Afterward we watched another episode of The Last Tycoon, which is doing the same, sometimes heavy-handedly but the acting makes it worth it.
Collapse