I had lots of things to get done on Monday and instead spent most of the day bogged down in bureaucracy that required a lot of phone calls. Some of them were enjoyable (to my niece for instance) and some just frustrating. But I only got 1/3 of the laundry done and none of the online files posted that I need to catch up on, and I didn't even manage to solo a Machamp raid in my neighborhood.

I had my leftover pancakes from Richmond for lunch and frozen veggie riblets for dinner, after which we watched two more episodes of The Last Tycoon, which remains heavy-handed in certain storylines but is pretty effective in others, fair to its women characters so far, and extremely well acted. Here are some of the sea lions, otters, and other animals in Morro Bay near San Luis Obispo: 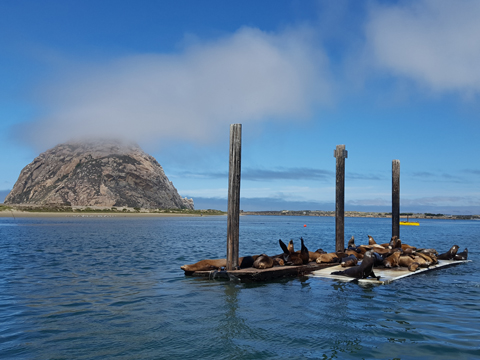