We had planned to go on Sunday to the Pennsylvania Renaissance Faire with Cheryl, but she had a death in the family, so we postponed that and instead went to the National Building Museum's Hive exhibit since this is the last weekend for it. Hive was built by the Studio Gang out of nearly 3000 recyclable paper tubes, silver on the outside and hot pink on the inside, which interlock like Crystal Climbers to make beehive-looking structures with wind chimes and percussion instruments, plus there are build-your-own cardboard pieces and round benches to sit and stand on: 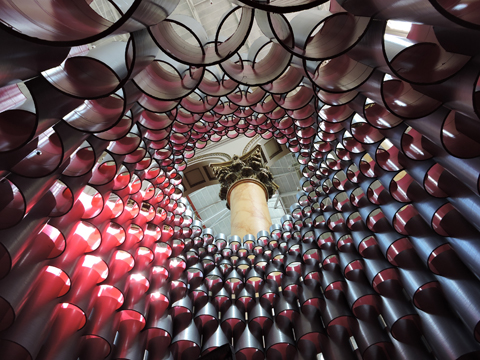 We also went to see the museum's Wright on the Walls (color your own Frank Lloyd Wright masterpiece), the paper models, and Timber City, an exhibit on the wonders of modern sustainable forestry and wooden building construction sponsored in part by -- who else -- several lumber companies. Then we drove to College Park, picked up Adam, and took him to dinner at Rasoi where we had fabulous Indian food before we gave him the new luggage we got him to take to his Microsoft internship interview in Seattle next weekend. We came home, watched Endeavour, then sat through the end of the unfortunate Red Sox game.
Collapse