Our Labor Day plan had been the Maryland Renaissance Festival, but as with the Pennsylvania Renaissance Faire on Sunday, Cheryl couldn't go, nor could most of the friends we usually meet there. So we postponed that visit as well and instead went to Brookside Gardens, which still has lots of flowers, particularly roses outside and begonias in the conservatory, as well as many geese, herons, turtles, frogs, butterflies, grasshoppers, and songbirds: 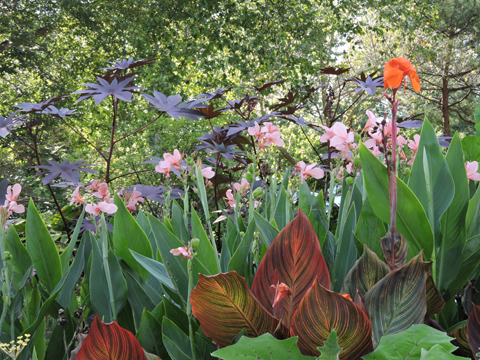 We had some shopping to do -- kitty litter, Pier One's end of summer sale, plus Roots Market since we were up that way so vegan pepper steaks, yay -- then we came home for veggie burgers and tater tots. We were surprised to discover that the season finale of Will was on, so we spent the evening around the Nationals victory and Orioles defeat catching up on the show though we won't get to the finale till we finish the episode before it. Hope everyone celebrating had a nice Labor Day!
Collapse