We had rain all day Wednesday, which was by far the nicest weather nearly anyone I know in the U.S. was experiencing -- older son and Oregon in-laws are under a cloud of smoke and ash, L.A. relatives are under a different cloud of smoke and some have had their AC turned off in rolling blackouts, and I don't have to tell anyone what friends in Texas and Florida are dealing with. But hey, nuclear war with North Korea will make global warming seem like a minor problem!

Anyway, my day was fairly uneventful: some work, some laundry, a Raikou raid, a phone call with one of Maddy's coworkers, froyo at the mall with my mother. One of the BBC channels is showing Inspector Morse on Wednesdays now, so after seeing only a couple of episodes here and there, though we've seen all of both Inspector Lewis and Endeavour, it's nice to see the earlier show! Here are some photos from the Central Coast Aquarium in Avila Beach: 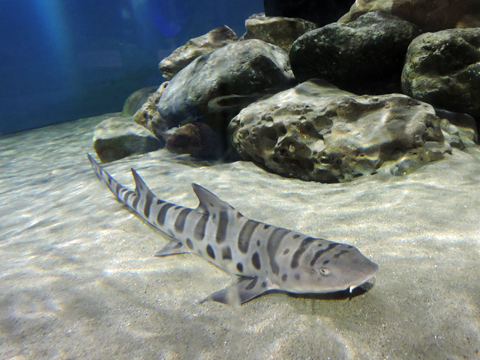