We spent Sunday in the area around South Mountain in spectacular early fall weather. Our first stop was the Boonesborough Days festival in Boonsboro, where we saw rescued raptors, historic cars, Civil War artifacts, a forge, a University of Maryland agriculture school information booth, a portable gristmill, amateur astronomers, a horse and buggy, lots of locally made food, and crafts including glassworks, furniture, pottery, doll clothing, ironworks, candles, ceramics, jewelry, chain maille, paintings, photo art, seasonal decorations, and more. After the festival, we went to South Mountain Creamery, where we got to pet calves and visit chickens and cows before getting cheese and ice cream in the store. We missed all of the Ravens' shutout victory over the Bengals and the Nationals clinching their division for the postseason, but both ended so well that we didn't mind. 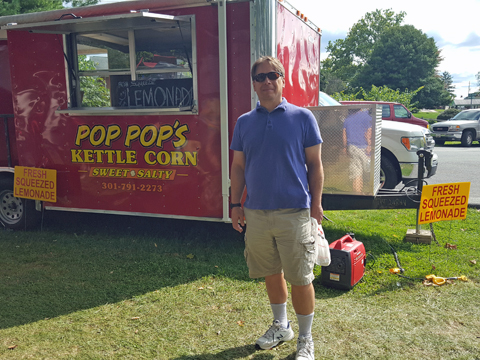 We ate a late dinner while watching the first episode of The Orville, which I liked rather better than most of its reviewers, though I may have been in a forgiving mood because I'm so mad at CBS about Discovery. So I enjoyed the wannabe Data with the similar voice, the wannabe Jem'Hadar villains, all the women -- I always love Penny Johnson Jerald, I'm very glad to see Adrianne Palicki on something other than Agents of SHIELD though they need to write her character better -- it is no worse than "Broken Bow" and I liked it better than "Encounter at Farpoint" the first time I watched TNG, so I will certainly watch again next week. It's no "Emissary" or "Caretaker"...but, when I was rolling my eyes, it was because of McFarlane's brand of humor included to lure his usual fans, not because of serious sci-fi stupidity. Afterward we watched this season's final, sad Endeavour, on which I must admit my favorite moment was Roger Allam's Thursday saying, "I am the law!"
Collapse