Tuesday mostly involved chores for me and half of them did not get done despite my best intentions. I have a bunch of chaos to deal with but on the scale of problems people I know are facing -- a couple in Florida STILL without power and several facing upheaval from the earthquake in Mexico and hurricane approaching Puerto Rico -- not worth detailing. In happy news, I got an invitation to the EX Raid on Thursday evening, but in unhappy news, it's right when Rosh Hashanah dinner should be ending so really lousy timing for American Jews.

We watched most of the Orioles game against the Red Sox, which was just as horrendous as it was the night before when the Orioles went into extra innings and proceeded to blow the game in humiliating style. That took up so much of the evening that we gave up on maybe starting any of the HBO shows that won Emmys and waited for Hillary Clinton on The Late Show (where Colbert annoyingly did not acknowledge why people were so upset about the Spicer stunt). Some photos of the art at Artsfest at Annmarie Gardens on Sunday: 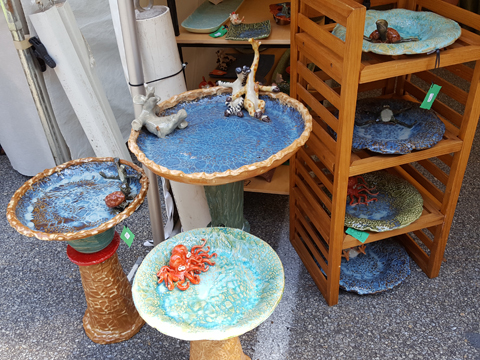