I had a very nice, very busy Saturday. In the late morning after Maddy went to work for the day, we met friends at Hot Fired Arts in Frederick, where we fused glass and painted pottery (which must now be fired in a kiln so we won't have the finished products for a couple of weeks). The rest of the group was going out for a late lunch/early dinner, but we ate bagels from Dunkin' Donuts next door because we needed to go straight from Frederick to Hanover.

Paul's aunts Jean and Nadine and their husbands (both Bobs) were visiting his parents -- Clair even donned the clown suit in which he used to visit kids in the hospital for them, though I'm not sure a clown suit was ever a good idea for sick kids -- and they had just finished touring around Gettysburg when we arrived. We went to Hibachi Buffet for dinner, then drove home and now we're watching Sleepless in Seattle because we've never seen it before (and, Seattle). A few pics: 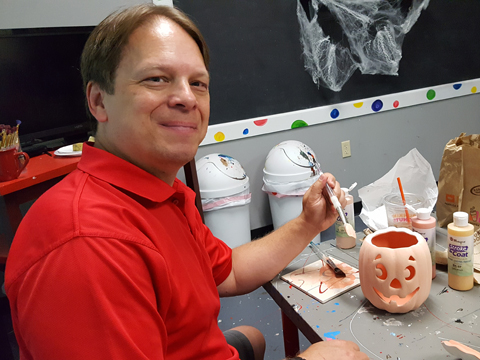