Tuesday was Daniel's 24th birthday, though I only talked to him via Google Messenger because he had work, then game night with birthday cake, so it sounded like he had a good day. Mine was too -- I did some shopping, then met

perkypaduan for lunch at Yuan Fu (vegan Chinese) where I have not been in far too long. Maddy needed a ride to the mall just when I needed to go to the post office behind it; that's where I was when a Snorlax hatched inside the mall, so I joined the local raid group and caught it.

I stopped to get cat food and raisin bran on the way home, though I did not fold laundry because I'd bought some fairy lights earlier at A.C. Moore and had to arrange them in bottles when I got home. After dinner, we put on the Nationals game, which was not a happy experience, but at least the Nationals have clinched their post-season spot, whereas the Orioles, already out of contention, lost to the Pirates by an embarrassing margin. Here are some photos from Lewis Ginter's butterfly exhibit and summer gardens: 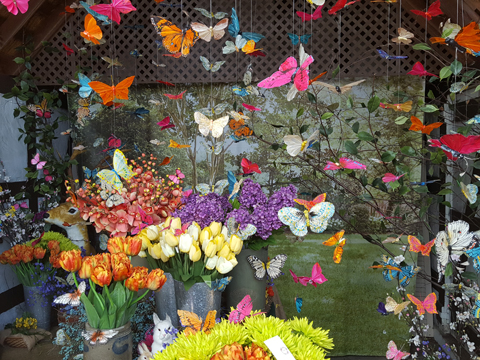