I am in Brooklyn with Paul and Adam for my Uncle Larry's funeral on Sunday. We picked Adam up in College Park, stopped at the Delaware House for lunch, and arrived in New York late in the afternoon after a brief stop at a mall to get Adam a dress shirt and tie since he thought for some reason we were going back home before continuing north so he could pick them up there.

Since we still had a few hours of daylight, we went to the Battery, which I don't believe I've ever visited before. My friend Mary had posted pictures recently of the Seaglass Carousel and I was dying to see it -- and ride it! I also hadn't realized there were such great views of the Statue of Liberty, the Staten Island Ferry, and the clipper ships that launch nearby.

We went to Tomato and Basil for pizza and had a funny experience, in that we were in line in front of actor Ben Shenkman whom I knew I recognized but thought he might be someone I knew from college or something. (The pizza was excellent.) Adam had some homework to do, so we spent the late evening watching Days of Future Past at the hotel. Here are some pics of the carousel and park: 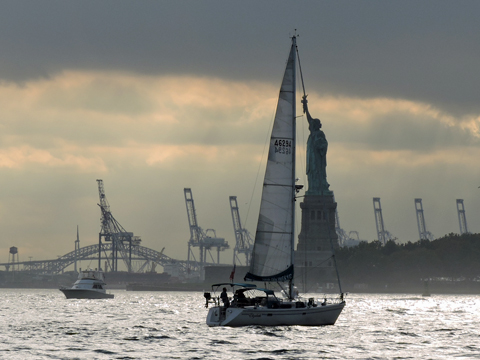