I had a nice day mostly hanging out with family -- did some work while Daniel and Maddy slept in, took them to meet Paul for lunch where he works, took them to A.C. Moore and Target so Daniel could get drawing supplies and Maddy could get vegan food, took Maddy to work and Daniel to my parents' to use their treadmill, then had dinner with Paul and Daniel and watched Avengers: Age of Ultron with them and Cheryl long distance. (I also squeezed a Tyranitar raid in the park in there, which Daniel understands because he's playing Ultra Sun and Moon.) Now we're watching the sad aftermath of the Seahawks-Falcons game, though I don't think Daniel is too devastated that Seattle lost! In the city's honor, here are some photos from our visit last month to Golden Gardens Park: 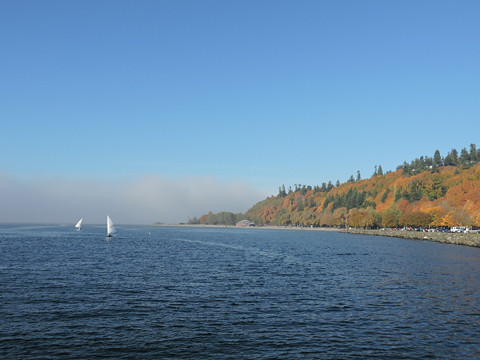