Tuesday was another gorgeous November day! I had lunch with my friend Noelle, whom I've known since elementary school, though like several of my childhood friends, I've spoken to her more in the Facebook decade than in the two decades before that. We went to Goldberg's Bagels and talked politics, pop culture, and our families (and by coincidence the French teacher from our middle school came to get bagels, so I got to say hi to her, too). When we returned to our families, I took Daniel, who had had lunch with my father, to pick up his medical records from his pediatrician so that he'll have his immunization schedule in Seattle.

Daniel wanted to work out in the afternoon, so I did some work, took a walk, and tried to get Cinnamon to eat since she was sick last night and this morning (I think the Fancy Feast tuna primavera did not agree with her). Paul made black pepper (fake) chicken for dinner, then we watched this week's The Flash, and, because Daniel had not seen it and I'd watched it on a plane so the sound wasn't great, we watched Get Out, which is pretty terrifying and extremely well done. Our leaves are mostly brown now, so here are a few more photos of how autumn looked at Cunningham Falls with Paul's parents a couple of weeks ago: 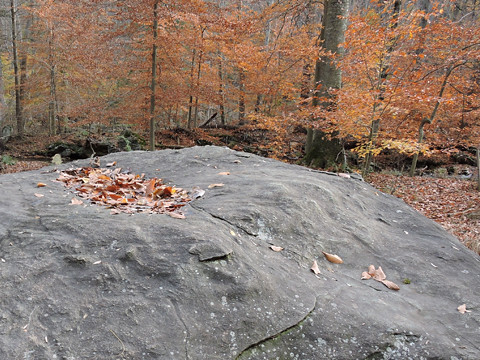