We had what would have been a nice low-key Thanksgiving had my desktop computer not had its graphics settings utterly screwed up by the latest Windows critical update (I know it was that because a system restore fixed the problem, but Windows promptly informed me it had to install the update again because it has some critical security issue). So once again I will probably be forced to spend my birthday/holiday money just to have a working desktop -- I am seriously thinking about getting just a docking station for my new laptop but I'm not sure how I can fit a new big monitor, laptop, and separate keyboard on my desk. Arrrrrgggghhh.

It was otherwise a very nice day; we watched the Thanksgiving parade and part of the Vikings-Lions game while eating and working on our computers, then we went to Great Falls to take a walk before picking up Maddy and going to my parents' for the Cowboys-Chargers game, then Thanksgiving dinner (for me that was tofurkey, veg stuffing, mashed potatoes, sweet potato casserole, cranberries, and carrot souffle, plus chocolate roll for dessert, all of which were awesome). When we got home so Adam could do some crucial work, we were in the mood for The Nightmare Before Christmas, so we watched that while DC pulled off a win against the Giants. 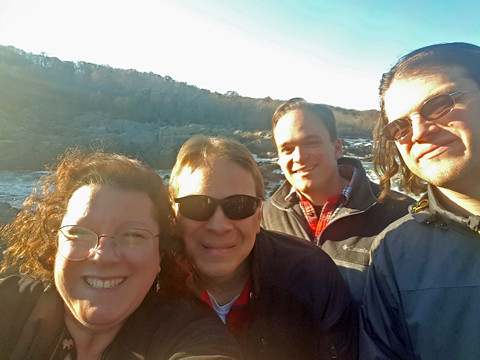