I was going to have a quiet chore-filled Monday, but it didn't work out that way. Alice was up in my area for an appointment, so we went out for bagels and compared notes on our Thanksgivings. Then I had a bunch of stops to make, after which I met Angela and Carrie for an early dinner at Lebanese Taverna, where (after I did a bit more shopping because they were stuck in traffic) we spent over two hours catching up since we didn't manage to get together during my insane October and early November.

I liked the first two parts of the Supergirl-Arrow "Crisis on Earth-X" crossover, which felt very comic-book-crossover (not as good as the Marvel movies but much better than anything Agents of SHIELD has managed interacting with the MCU) and appropriately funny ("It was Oliver in the High Castle"). Then we watched the Ravens on Monday Night Football before the late night comedians covering Harry and Meghan's engagement. Some arrangements from the fall flower show at Brookside Gardens: 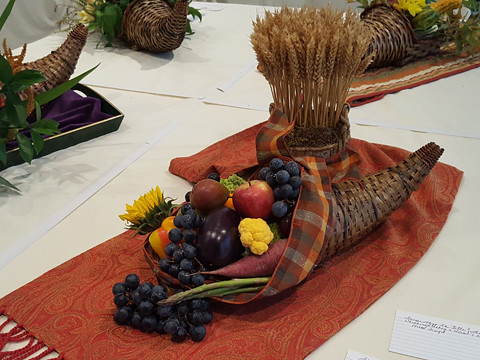