I got to continue celebrating Tuesday having lunch at CPK with Kay before Chanukah started in the evening! Though I must peevishly note, like many December babies, how aggravating it is not to have recovered from the one before jumping into the other...it would be so nice to be able to move my birthday to June. Before lunch I tried to catch up on phone calls and emails I didn't have time to get to on Monday, and after lunch I did a bunch of shopping and worked on holiday cards.

Paul made (faux) chicken and latkes for the first night of Chanukah and we watched some more episodes of The Crown courtesy Maddy's Netflix, though she had to work late into the evening. It's quite joyless so far this season; I get that they're trying to humanize her but if the point is that monarchy still serves a valuable function, it's not conveying to this American viewer. I know it's Chanukah but the photos I cropped are all Christmas trees from Yuletide at Winterthur, oops! 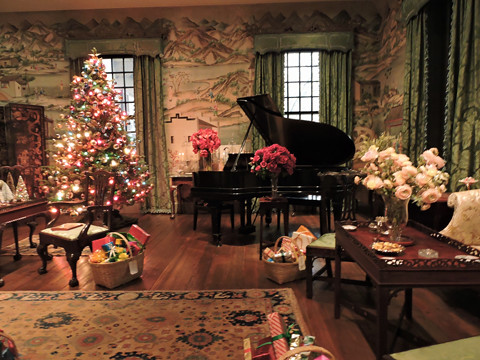