I spent the day before New Year's Eve with Cheryl, Paul, and Daniel, first in Baltimore, where we had Indian buffet at Lumbini and went to see the Walters Museum's Faberge exhibit plus their fantastic Asian, Egyptian, and European collections, then in Bethesda, where we went to see The Greatest Showman (which I loved despite vast historical inanities -- I thought they rewrote Barnum to make it a teeny bit more accurate and fair! -- and utter predictability if you've ever seen a Hollywood musical whether you know anything about Barnum or not -- plus we ran into my parents and friends at the movies) and have dinner at Tara Thai. We were then going to go to Karen and Jim's party but Maddy came home early and due to various chaos we ended up staying in, watching Die Hard With a Vengeance until Graham Norton's midnight New Year's Eve show with Jackman, Efron, and Zendaya. Happy New Year! 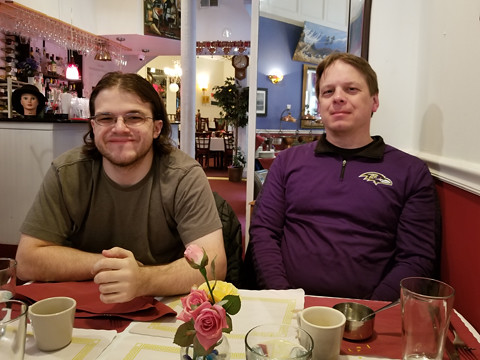