It remains very cold in the DC area -- not nearly as bad as other parts of the country, and with much less snow, but still too much so for me to want to spend much time outdoors. So I was not sorry to have a bunch of work to do on Thursday while Daniel was working here -- he had two phone conferences, so I got him California Tortilla and myself Goldberg's Bagels and we ate in the kitchen. He has plans to meet friends on Thursday at a convention downtown, so we're hoping not to get too much snow tonight.

After dinner, despite the fact that Daniel has not seen The Room -- though he is familiar with the Rocky Horror-type presentations of it in L.A. and Seattle -- we went to see The Disaster Artist, which is both extremely funny and far better acted than The Room. The comparison shots over the credits are so much fun to watch. And here are some photos of Grover Cleveland's birthplace in New Jersey, including holiday decorations, his father's church, a bathtub of the area, and family needlework: 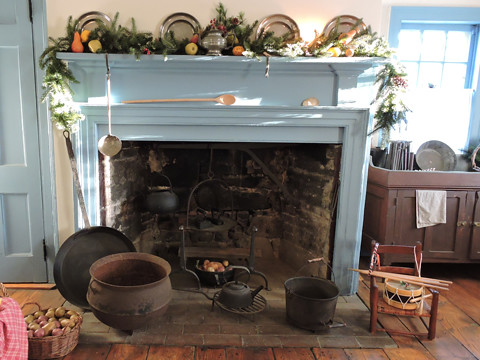