Adam is back in the U.S., though I have not seen him yet because his plane landed in Newark and he is taking an overnight bus to the D.C. area! And Daniel is back at work in Seattle, though he discovered he left some computer stuff here so I went to the post office to mail them back to him. This was fortuitous, as the post office is next to the mall, and when I went to see if any of my friends were raiding the Pokemon at the gym there, I got to see several people I haven't talked to in person since before Christmas and my friend Mel and I went out to lunch after we caught Groudon.

I still have not organized all the things left over from having older son here, and I'm trying to decide how much of Adam's stuff to clean up for him versus how much to leave where he left it before he gets home; I could ask him, but right now we're discussing President Winfrey over Messenger instead. Paul and I just caught up on four episodes of Blindspot so we're ready for the new season. From the Walters Art Museum's Faberge exhibit, here are some items owned and commissioned by the Russian royal family: 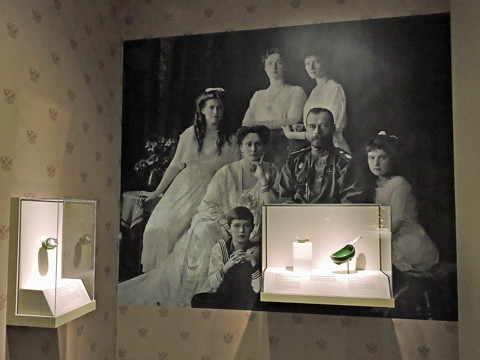