Adam borrowed our car on Thursday morning to go put a down payment on what hopefully soon will be his car, so I worked until he got home, after which I went to meet Karen and Angela for lunch at Tara Thai. I hadn't seen them since before the holidays! Then Adam and I went to see Lady Bird since we had both read that it was great, though I have to admit that the screenplay, which is winning the bulk of the awards, seems a bit...well, full of coming-of-age cliches and elements more likely to ring the bells of adult critics than viewers the age of the protagonist. The acting pulls up the writing, but I know I'm old because I thought the mother was the best character.

Paul made jambalaya for dinner, which Maddy was here to eat with us. Then we were going to all watch a movie together, but Adam's jetlag caught up with him and he went to bed early. So instead we watched some 11th season Bones, which I am still liking even though everyone I know who was a fan was pretty burned out before this point. Now Adam is working on a presentation on deep learning for Paul's team at work. Here are some photos from December of the US Botanical Garden's annual display of models of the major DC monuments made out of natural materials and plant fibers, including the new African museum and accompanying holiday poinsettias: 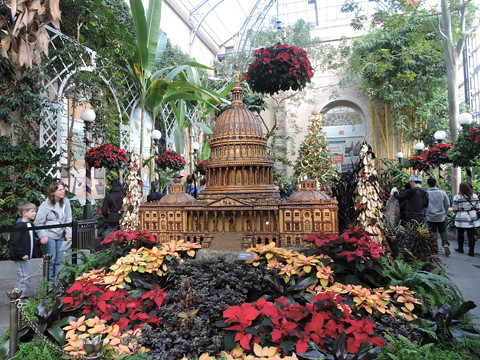