Adam's good friend Robert, whom those of you who have read this blog for a long time have seen in photos from track meets and school dances and vacations and college, lost his battle on Saturday with the brain tumor from which he has been suffering for several years. So we had a sad, distracted Sunday, though we did some nice things too. We had brunch with my parents, sister and niece, then we went downtown to the Renwick Gallery to see exhibits including Rick Araluce's The Final Stop, in which a gallery is filled with a model of an underground subway platform complete with sound and vibration; Murder Is Her Hobby, a collection of Frances Glessner Lee's miniature crime scenes to train homicide investigators; Parallax Gap, an architectural firm's experiment to portray iconic American buildings from skewed vantage points; and, from the permanent collection, Connections: Contemporary Craft at the Renwick Gallery: 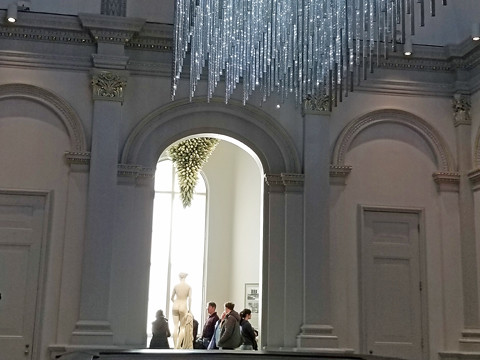 Adam took a nap in the late afternoon and I went out to pick up some DVDs about astronomy that a neighbor was freecycling, then we watched the end of the delightful Pittsburgh-Jacksonville game until the Jaguars had it well in hand. We went out to dinner after halftime of the Minnesota-New Orleans game, had lots of excellent Thai basil and orange tofu at Grand Fusion, then came home for the amazing end in which we thought the Vikings had it won, then thought the Saints had it won, then saw the Vikings win on the last play followed by chaos since the extra point had to be snapped if not kicked. We debated watching several serious dramas but decided we needed a mindless, shamefully rude movie and we ended up watching Tropic Thunder, which it's hard to say whether the movie is offensive or is just bang-on at pointing out and scoffing at things serious dramas do in Hollywood over and over that are offensive.
Collapse