On Saturday we went to meet Paul's parents at Simply Asia in Thurmont; Adam came with us because they hadn't seen him since he went to Israel and they wanted to see his photos, particularly Paul's father, who went to Israel nearly 40 years ago. We were at the restaurant for nearly two hours sharing kung pao and black pepper tofu and looking at pictures.

By then my in-laws were tired, so they went home and we went to Black Hill Regional Park, which was on the way to our house. The lake was partly frozen, so the geese, ducks, and coots were standing on the ice shelf, but it wasn't very cold and there were lots of Pikachu spawns for the Pokemon Go Community Day event -- I even caught a shiny one, though it was on my baby account. 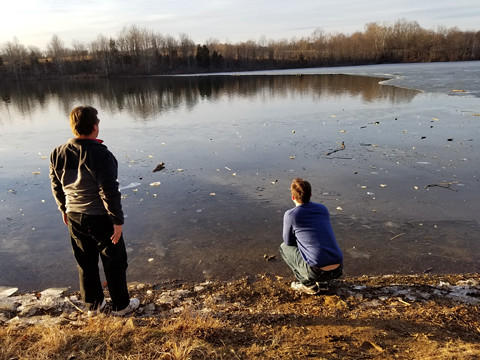 Adam returned to College Park, although he won't need to go to work at NASA on Monday unless the government shutdown ends over the weekend; classes at UMCP start Wednesday, so a lot of his friends came back this weekend. We watched Professor Marston and the Wonder Women, which was terrific although some of the dialogue was stilted; the actors were all good and it was nicely filmed.
Collapse