Cheryl and I had not seen each other in weeks due to a lot of craziness in both our lives in the past month, so we took Monday off completely so we could go out for Indian food and see Call Me By Your Name. It is beautifully paced and extremely well acted, though some of the directing choices seem odd to me -- the human bodies are portrayed as flawless, no pimples or wrinkles, yet the Italian sky is often blown-out bright instead of color-shifted to blue -- and although I haven't read the book in many years, I'm not sure the film quite captured the same dizzying highs and lows of first love. Armie Hammer is so beautiful that he's a reason to see it because the camera can't stop looking at him.

Because we just couldn't resist, we also watched Thor again before she went home (and looked at Loki keychains and Thor Funko Pop figures and discussed various comic-vs-mythology possibilities post-Ragnarok, principally the likelihood of whether Hela will turn out to be Loki's mother rather than his adoptive sister and whether the Goddess of Death will return either to get together with Thanos or get it on with him; we've both read all the theories that Loki will die in Infinity War but Loki has died enough times in the MCU that I'm not losing a moment's sleep). Because we had nice weather and I need sunshine, here are some photos of the fun shopping in Pismo Beach from last August when I was in California: 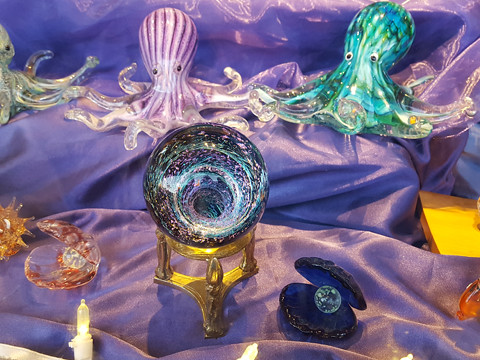