Post-Super Bowl quickie -- Adam just left to drive himself back to College Park after watching the Eagles beat the Patriots, which was fine with me, though I generally don't root for either team (the Patriots are, well, the Patriots, and I have never forgiven the Eagles for Michael Vick). Still, it was an exciting game in the second half which was the half I really watched, having been distracted at Linda and Ira's Super Bowl party by food, catching up with people I've known since before high school and friends of friends I first met at one of these parties more than a decade ago, and of course the commercials.

Earlier in the day, we had egg-and-veggie-Canadian-bacon sandwiches for lunch and watched most of the Kitten Bowl, then discovered that Adam had never seen Blade Runner so we watched the version we own (first director's cut, no voice-over, no happy ending, no indication whether or not Decker is a replicant, Batty's soliloquy intact). My parents met us at the Super Bowl party and Maddy accompanied us although she left early with a stomachache. I will confess that I'm looking forward to the Winter Olympics than I was to this game other than wanting to go to the party! Some pics of the people, the pets, and the food: 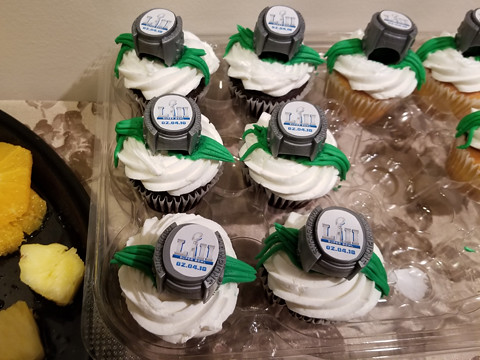