We went early Saturday to Lakeforest Mall for the annual Lunar New Year celebration, which kicked off with a dragon dance, a lion dance, and speeches from many politicians from the Governor of Maryland to the county executive and local delegates. We watched some of the martial arts and folk dancing and we visited the art show before doing a bit of shopping in the mall and having lunch at the House of Kabob, which serves food from India, Pakistan, and Bangladesh as well as kabobs, so I got to have chana masala and pakora. 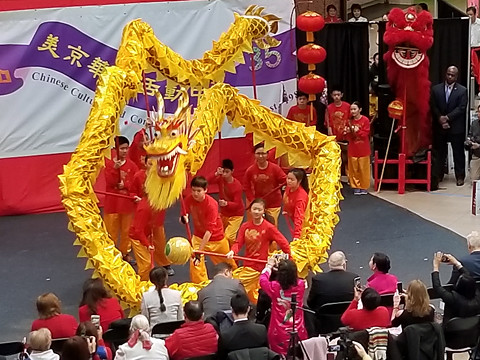 It had started to snow by the time we left the mall and went to Strathmore, which had two small but enjoyable art exhibits -- one on impressions of Shakespeare and Poe by local artists, the other sacred geometry shapes in glitter by Bethesda's Jordann Wine. We had to stop at Giant for a couple of necessities and it was really snowing by the time we left, so after a quick stop to catch a Castform in its snowy shape, we have spent the evening indoors, eating sandwiches for dinner because we were full from lunch and watching the Olympics!
Collapse