I spent a delightful Sunday with Paul, Cheryl, and our friend Robert, who came over in the morning for brunch before we all went downtown to see Chess at the Kennedy Center with Ramin Karimloo, Raúl Esparza (singing with a sore throat), and the phenomenal Karen Olivo in the difficult role of Florence, which gets reworked slightly every time the show gets revived (is it about the love story? is it about her past and her father? is it about being used as a pawn?) but gets the showstopper songs "Nobody's Side" and "I Know Him So Well"; we had heard Karimloo do "Anthem" in concert so we knew that would be wonderful but Esparza's "Pity the Child" may be the best thing in the show.

We went out on the riverside terrace behind the grand foyer and visited the gift shops before we drove back into Maryland (spot the three deer on the hillside spotted from the Clara Barton Parkway in the photos below) to have dinner at the Silver Diner before the Virginia residents departed to drive back. I have spent the evening watching the ice dance short program; I'm kind of pulling for Virtue and Moir just because I love how they move on the ice, though I also really like all three American teams; I'm not quite as much in love with the French pair as Tanith White is, but they do pretty lifts and no one should lose because of a costume malfunction, so we'll see what happens tomorrow night. 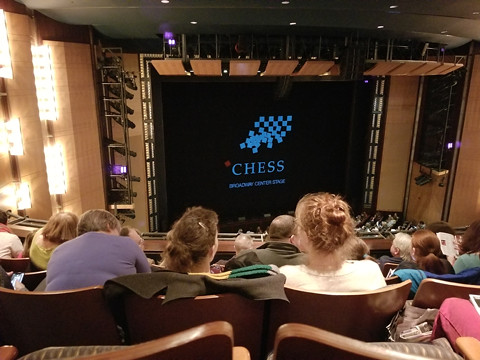