I had a lovely President's Day -- lunch at Cava with Paul and Cheryl, then Black Panther with them plus Karen, Jim, and Teresa at Arclight (we all thought it was wonderful, both within the MCU and as an action movie with a political perspective). Then Paul, Cheryl, and I came home and watched What We Do in the Shadows, which none of us had seen before, and howled through the whole thing, since it is both hilarious and very clever.

After Cheryl went home, I spent the evening yelling at the TV about NBC's ice dance coverage, which was both erratic and biased, but Virtue and Moir defeated the (now I can say it) overrated French team and the Shibutanis skated beautifully though I feel badly that Hubbell and Donohue, whom I really like, were not on top of their game. It's late so more tomorrow; here's a picture of my lazy cats and of me and Delta with superheroes! 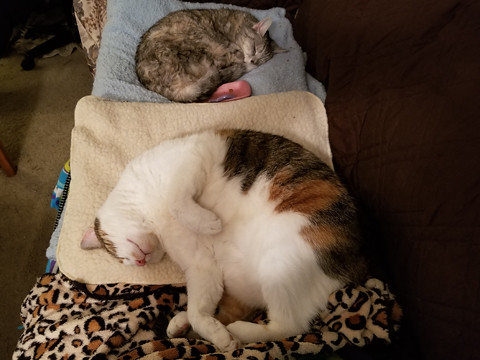