I got to see Cheryl on a Wednesday, which I believe is a first in the decade and a half that I've known her -- Wednesday is new comic day and she always had to work until this month. We had Mirch Masala at the mall and went to see The Post, which I had seen before but she had not; it's still excellent, oddly overlooked so far this awards season given the oddly excessive hype for other films though it's pretty traditional in structure, so much so that we came back to my house afterward and watched the obvious sequel, All the President's Men, which remains the gold standard for journalism movies and remains terrific to this day.

After Cheryl went home, Paul and I watched this week's X-Files, which is hilarious, somewhat distressing, gloriously well acted and beautifully directed -- really, except for that first episode, the entire season has been wonderful -- and this week's Designated Survivor, which is didactic, clumsily scripted, frustratingly predictable, and worth watching only for a couple of actors. In between we watched a Bones episode with totally forgettable forensics but fun storylines about Brennan's surprise party, Angela's Genius Grant, and Daisy's NFL job. Here are some of the local crocuses and daffodils, plus a squirrel enjoying the weather: 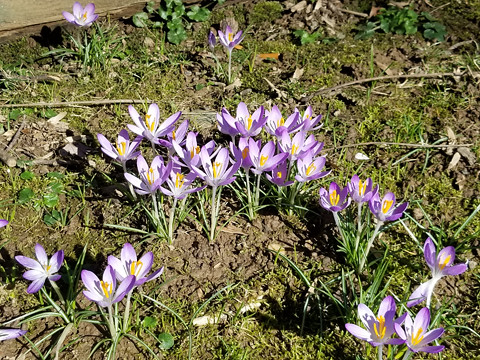