For the first time in my memory, nearly everything in the DC area was closed for high winds unaccompanied by rain, snow, or hurricane-related complications. Given that we saw downed trees and power lines all over the 5-mile radius that was as far as we ventured, this was probably a good idea. Paul worked from home, so we both did computer-related chores while watching the Big 10 basketball tournaments (yay Maryland women, woe Wisconsin, and now I have to listen to lots of Michigan people over the weekend).

We had dinner with my parents, though getting home proved complicated because there were police keeping people from driving past downed electrical wires so we had to take a long way around. We watched the return of Blindspot, which was quite good, and Agents of SHIELD, which was less so until the end of the episode, though that was too gory for my tastes. Here from last fall are the sea lions at Prospect Park Zoo in Brooklyn, getting some exercise with trainers and socializing when not lounging in their pool: 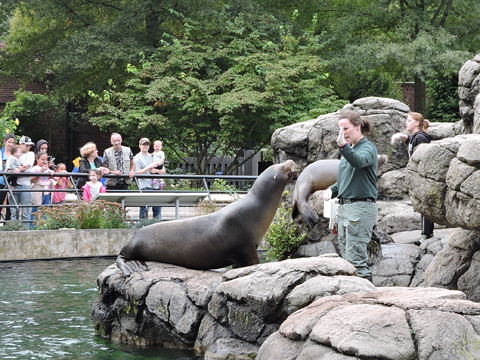