We woke to emails about more road closures and texts from friends who had no power overnight, including Alice and her family, so we tried to make lunch plans but ended up concluding that with all the detours, it would eat more of the day than her family had available. So we ate at home and went to Locust Grove to hike, but the main trail had two huge trees down across it.

Then Adam texted to tell us that he had gone kayaking on the Potomac River, but had left his water shoes at our house, and when he discovered how difficult it was to paddle upriver, he got out to walk and concluded that he might have a four-mile shoeless hike carrying a kayak. So we left Cabin John Park and went to meet him at Lock 10 to take him back to his car at Old Angler's Inn. 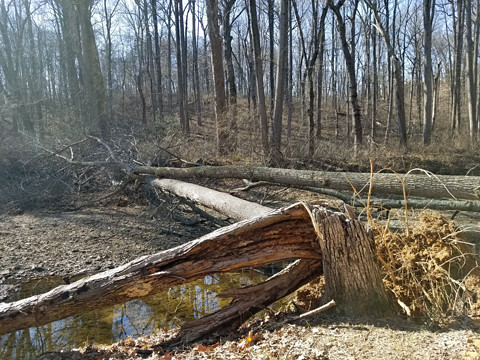 Adam was hungry after his kayaking and had mail waiting at our house, so we persuaded him to come for pizza and a viewing of Get Out, which he had not seen, before he headed back to College Park, which is also full of downed trees that made biking difficult. After he left, we put on women's basketball and I tried to catch up on computer stuff before SNL with Charles Barkley.
Collapse