I spent Sunday afternoon with Paul and Cheryl at the Baltimore Museum of Art, having brunch at Gertrude's and seeing pretty much every exhibit in the museum, including the special exhibits Moon Dust by Spencer Finch, a light display representing the chemical representation of moon dust; Counterparts by Njideka Akunyili Crosby, a Genius fellow portraying her experience moving to the United States from Nigeria; and the glorious Entangled Orbits by Tomás Saraceno, who uses string spider webs and iridescent pieces to create indoor clouds. 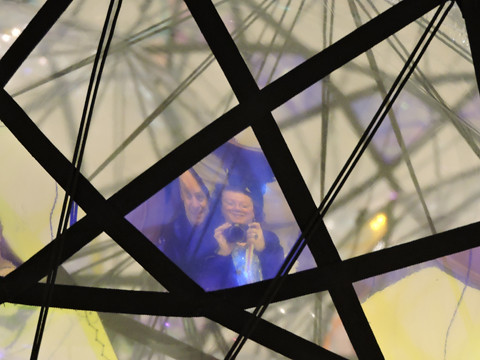 The evening of course has been about the Oscars. We all wanted Helen Mirren, not the jet ski. We agreed that supporting actor and actress were predictable but Janney was utterly brilliant in I, Tonya so I'll let it slide that Rockwell went home with an Oscar for playing a darker, more racist riff on what he often plays. I love the Sufjan Stevens song from Call Me By Your Name and I REALLY like his jacket, but I thought he'd be losing to "This Is Me" and I'd be happy rather than to Frozen I mean Coco so meh. I am SO happy Jordan Peele won the screenplay award (and James Ivory for the other one)! I thought The Shape of Water was beautifully directed and I love del Toro, so that was fine, though it would have been all right with me if Peele won that one and Best Picture too.
Collapse