Though we were warned to expect bad weather, the storm currently making people north of us miserable only barely skirted the region here, meaning that it was chilly and overcast but we got little rain and only a few flurries here and there. I got to enjoy the park and get some shopping done, though it was a fairly quiet day mostly about chores and getting work done. We watched this week's not-good X-Files with its bad cliches about witchcraft and too many dead children, and Designated Survivor which had a much more interesting story than the preview suggested.

I never got the bed made because there were two cats on it when I got up, soon joined by a third who refused to move until the afternoon. Here are some more special exhibits from the Baltimore Museum of Art: Spiral Play: Loving in the '80s, a display of late African-American artist Al Loving's three-dimensional rag-paper collages using spirals to signify the continuity of life, and The Succession of Nature, a full-room exhibit by Baltimore's own Phaan Howng in collaboration with Blue Water Baltimore using the colors of toxic waste to show how pollution damages local waterways. 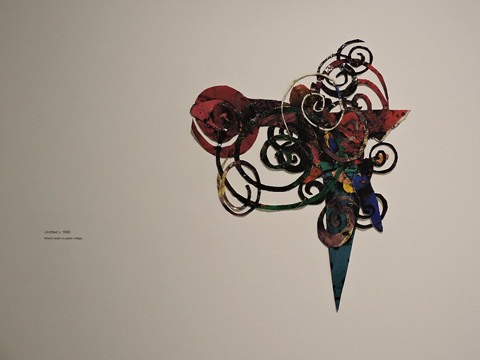