While my friends in the north were waiting for their power to come back on and their lawns to be cleared, I got to see some spring on Thursday! There are now plum blossoms in the park along with the crocuses and snowdrops, and there are a couple of lawns on my street with blooming daffodils, though ours are still tightly curled yellow-tipped buds. Maddy returned from California, though I barely saw her -- she dropped off her things, showered, and went out with friends. As a reminder that spring is coming, here are orchids at Lewis Ginter Botanical Garden in Richmond from last March: 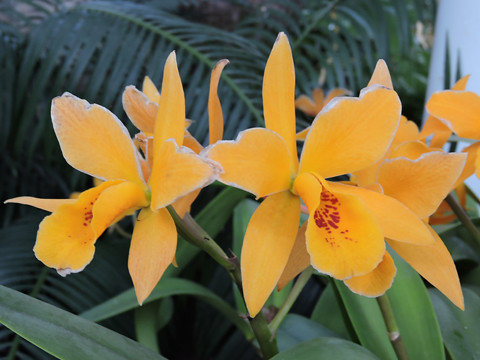 We spent the evening watching the final three episodes of Bones, which I am quite sad to have finished, as it remained enjoyable through its entire 12-season run, and very glad I watched the era of binge-watching, since I have no idea whether I'd have felt it jumped the shark at various points if I didn't know it ended well. Favorite lines from the last episodes included the discussion of writing a dissertation on the effects of gamma transformation on the Hulk's bones and Booth's declaring, "We're way better than Mulder and Scully"...to which Brennan responded, "I don't know what that means."
Collapse