The weather on Sunday was gorgeous, not a cloud in the sky, and I spent most of it with Paul and Cheryl in the Brandywine Valley. We were thwarted at our first planned stop because the Caesar Rodney Half Marathon had all the roads closed around the art museum, but that just gave us more time in the gardens after we ate lunch in Winterthur's lovely visitor center. The March Bank is only just coming into bloom there but there were plenty of crocuses and some daffodils as well as the winter aconite and glory-of-the-snow. Inside, we went to see the exhibit on iconic sports memorabilia, including a Honus Wagner baseball card on loan to go with some Wagner items from Winterthur's own collections.

From there we went to Longwood Gardens, which is having a Winter Blues Festival of blue flowers in the conservatory including blue poppies and cineraria, plus orchids all over the conservatory and daffodils and tulips in the fruit house section. There's not much blooming in the outdoor gardens yet but the grounds are always pretty. We drove home while it was still light and went to Attman's Deli for breakfast-for-dinner before Cheryl had to go home. Then we watched the unfortunate end of UMBC's wild ride in the NCAA tournament, though they kept it close for most of the game, and saw this week's Timeless, not guessing that while we were taking a break from basketball, Xavier would get bounced from the tournament by Florida State! 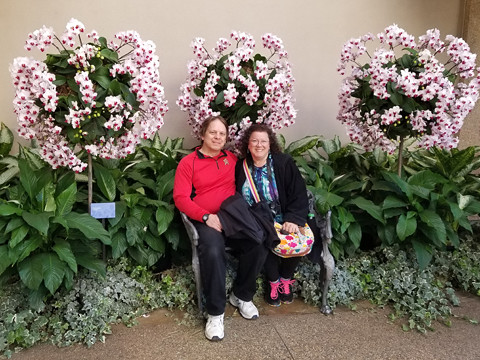