So after spending a ridiculous amount of Tuesday working on a Shutterfly photo book, I spent a ridiculous amount of Wednesday rearranging my bookshelves to make my previous Shutterfly books easier to get to so other people can read them (and I can too without having to move action figures out of the way -- the Princess Margaret biographies I put behind the action figures are less likely to be missed). That, getting laundry folded, catching another shiny Lugia, and getting in a walk in the park while it was only raining enough to get me moderately damp. Thursday is supposed to be 70 degrees so no rain will bother me!

Paul, Cheryl, and I were up to Captain America: The Winter Soldier in our MCU marathon. I often tell myself I prefer the first Captain America movie because it has so much more Peggy Carter and I love period pieces, but I love pretty much everything about The Winter Soldier. Chris Evans gives a really wonderful performance and I love Steve and Sam, Steve and Bucky, Nick Fury, and everything Natasha and Maria do, plus the brief Peggy bits we do get. (Natasha has more chemistry with Steve and Sam both than she ever gets with Bruce.) From Winterthur, the early March Bank bloom: 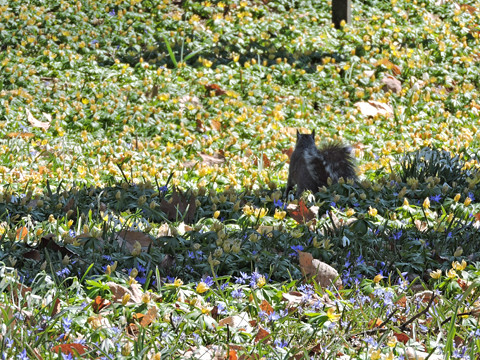