The weather on Easter Sunday was glorious (with SNOW forecast overnight, and not even April Fool's), so we went downtown to enjoy spring before the cherry blossom crowds. We parked near the Folger Shakespeare Library because it has an exhibit on early printing called Beyond Words: Book Illustration in the Age of Shakespeare, including one of the First Folios, several religious texts, illustrations for a deck of playing cards, and nautical texts with gorgeous woodcuts of ships. From there, we walked past the Library of Congress and the Capitol -- both of which have cherry and magnolia trees coming into bloom, as well as lots of forsythia and some freshly planted daffodils and tulips -- to the US Botanic Garden, which is in the midst of its spring orchid show. After visiting the outdoor gardens there as well with birds bathing in the fountains, we walked around the Native American museum garden and across the mall to the National Gallery of Art, which has lilies around the fountain in the atrium; in one of the side courtyards, Richard and Mika Stoltzman were giving a concert on clarinet and marimba of short classical and jazz pieces. When we returned around the Capitol, there was a Muslim wedding taking place right in front of it. 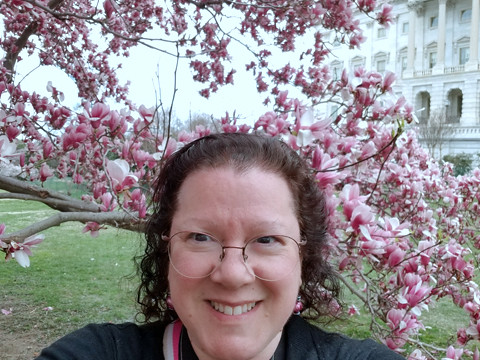 We stopped at the food store for groceries and had (faux) chicken with mushrooms on the way home, then we watched NBC's live concert version of Jesus Christ Superstar. This show was one of my first exposures to the story of the Passion, I've been familiar with both the concept album and film soundtrack since childhood, and I have never seen a version of that show that I didn't love, whether it was high school, dinner theater, or a Spanish college production I once caught on public television. This was no exception, particularly because the stagecraft was so interesting -- more cameras and a more intricate set than I expected for a "concert" performance, terrific lighting particularly the way the "firelight" reflected off the glitter thrown onstage during the Temple scene during "I Don't Know How To Love Him" and the post-crucifixion apotheosis. John Legend's singing was fine but I thought he was out-performed by the musical theater actors, particularly Brandon Victor Dixon and Norm Lewis; the guy playing Peter was okay, but since Jesus nicknamed him, he should look like a Rocky. And despite my love for the original, I have to admit that "God, thy will be done, destroy your only son" is a more powerful lyric than "God, thy will is hard, but you hold every card."
Collapse