We had cats pacing on us even though it was Saturday morning, so since we were up at 7:30 anyway, we decided to go downtown early to see the cherry blossoms before 1) crowds or 2) snow started to arrive. It was probably the chilliest day on which I've ever seen the blossoms, but I have to admit I prefer that to hot and mobbed; the views were great, there wasn't a single spot where we got stopped or crushed by throngs of people, we saw several different species of water birds, there were many daffodils and some tulips plus magnolias, hyacinths, and lots of little violets planted nearby, and we were home by lunchtime. 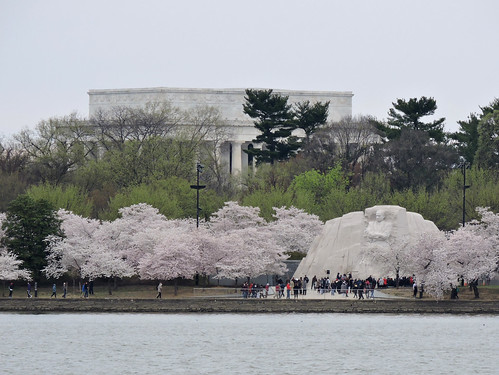 In the afternoon, around watching depressing Orioles and Nationals losses with some highly questionable officiating, we went to the food store and did some chores. Adam messaged to ask if he could stop by and pick up some mail and camera equipment, so we had him here for dinner, though it was a quick visit because he had to be back in College Park by 8 for one of his volunteer jobs. Paul, Cheryl, and I wanted more Marvel, so we watched Deadpool, which remains hilarious, then we caught up on the excellent Black Lightning before putting on SNL ("Black Jeopardy" is the best)!
Collapse