Despite some less than ideal weather, I spent a fine Sunday downtown with Paul and Cheryl, with whom I had tickets to see Potted Potter at the Shakespeare Theatre Company's Sidney Harman Hall. First, we went and walked around what was left of the cherry blossoms -- at this point the trees are more green than pink and white, though they're still pretty, especially on a rainy day -- and took what was supposed to be our picnic to the mostly-deserted food court at L'Enfant Plaza. On the way to the theater, we stopped at the National Portrait Gallery to see the new Obama portraits and the Sylvia Plath exhibit. The play itself is hilarious in the manner of an extended Renfaire skit (if you've seen Shakespeare's Skum do Henry V, it's that sort of interpretation) and includes audience participation Quidditch and a climactic duel set to disco. 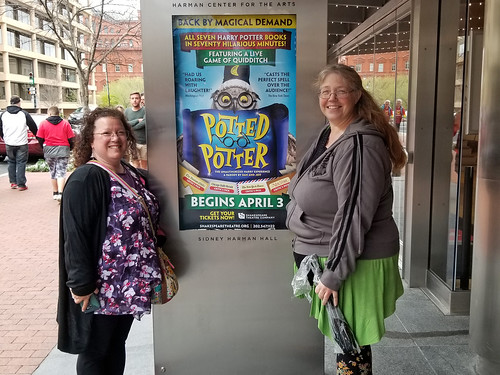 It was a Pokemon Community Day, so I caught shiny Mareep on the way to the car, then we came back to the house and ordered pizza which we ate while watching X-Men extras. Eventually Cheryl had to go home, while Maddy was in the midst of a big cleanup of her room so we all got organized for garbage pickup on Monday. Then we watched Timeless and Last Week Tonight (on which John Oliver revealed that he bought a bunch of Russell Crowe's props at Russell's divorce auction to try to help the last Blockbuster in Alaska, including the leather jock strap from Cinderella Man and Javert's vest from Les Miserables though not Jack Aubrey's violin). And Adam survived his kayaking expedition, though his inflatable kayak did not!
Collapse