My morning was calm and my early afternoon was kind of nice -- I took a walk in the drizzly park and bumped into friends -- but my evening has pretty much thoroughly sucked. Last night Paul asked me whether I had tried to log into our bank account online at three in the morning because he got an alert that someone had tried and failed to log in. I said of course not, I was asleep. He figured it was a one-time phishing thing, changed the password, and we figured that was that. Today I got a call from one of my credit card companies, telling me that they had had to decline a request to cancel my card because whoever made the request put in the wrong name for my mother's maiden name. They asked whether it was myself or my spouse who had made the request. I said no, canceled the card, went through the fraud procedures, and while this was going on, I got an email from my other credit card company telling me they had successfully canceled my card and were overnighting me a new one. I had never requested that either card be canceled.

After a lot of phone calls, I now know that someone called from what both banks had recorded as my own phone number, at a time when I was in my house so the call was certainly not really placed from here. Whoever called not only knew my credit card and bank card numbers, but also the last four digits of my SS, my mother's maiden name, my addresses and phone numbers -- things they didn't get from a skimmer or going through my purse. In other words, this is professional identity theft, possibly from the Equifax hack or one of the other big ones. Right now I have NO working credit cards (and can't risk having a new one sent, since someone tried to have two new credit cards overnighted to my house; I assume they'll be watching for my mail/FedEx deliveries), and for all I know someone is at this moment trying to take out a mortgage or something in my name.

And the person I would once have called about this, who straightened out my credit years ago when someone with the same name as mine had bad phone bills and credit card bills showing up on my report -- my first employer, my father's very longtime friend, a lawyer who specialized in creditor's rights -- died a few weeks ago. So my evening has involved a lot of changing passwords and looking for information on various credit card and credit agency web sites. Cheryl kept me company online even though I couldn't deal with watching a movie: I half-watched The Flash whose season can't end soon enough, then the season premiere of The 100 which seemed pretty awesome (the new villains have a woman in charge, as always on this show!) but I couldn't give it my full attention. Here are some of the animals and their babies we saw Sunday at Frying Pan Farm Park: 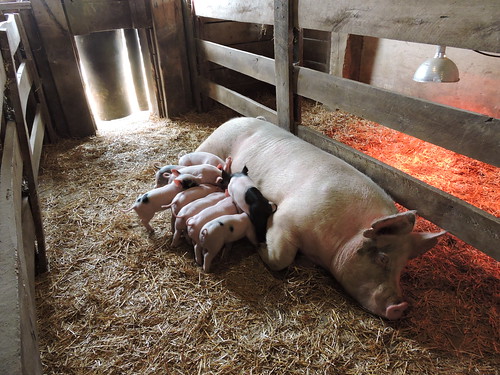