It was Take Your Child To Work day on Thursday, which I took as a good enough excuse to go meet Paul at his office because he had spotted goslings around the pond in back and I wanted to see them! We took a nice walk around the water and saw flowers, koi, and a frog as well before he had to go back to work. Then I went to stop at Target for a couple of things and walked around Lake Washingtonian, where there were at least 18 goslings in a big group with 6-8 adult Canada geese! Four in Rockville, four in Gaithersburg: 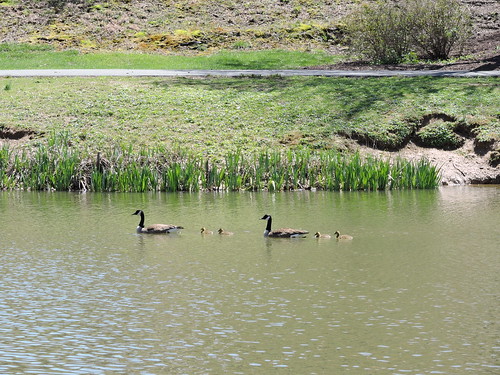 I did a quick Pokemon raid at Cabin John Park and we had tacos for dinner. On Friday afternoon I'm going to see Avengers: Infinity War with Paul and Cheryl, so I really needed to see Thor: Ragnarok again one more time because there's pretty much nothing in that movie that doesn't give me joy, and I'm happy to have a conversation about congnitive recalibration and "YES! That's how it feels!" with anyone going on about how mean Thor was to Loki; I'm far more worried about how the Russos may have treated him.