I had an uneventful Tuesday though it was quite nice, since the weather was gorgeous (70ish, partly overcast, breezy, azaleas and dogwoods blooming everywhere) and the bunnies were out. After two hours of screaming literally and figuratively, over the phone and online, with Amazon and the company that issues their credit cards, I even persuaded them to return the nearly $20 in points that vanished when I had to cancel the credit card whose information was stolen.

We watched this evening's entirely forgettable Flash, which mostly demonstrated that the writers had no idea who Marlize was at the start of the season and now can only write an endgame by making nonsense of her motives, then the great joy of The 100, where even the things I don't like are awesome because every powerful position usually given to a man is occupied by a woman (and the guy in my favorite romantic pairing does all the things girls are usually accused of doing).

I meant to post these pictures back in March before the exhibit closed but I got distracted, but here, belatedly, are some photos from Jordann Wine's Infinite Glitter at the Mansion at Strathmore, which is exactly what it sounds like -- shapes from sacred geometry, mandalas and vesica pisces, using glitter and glue to create contrasts and reflect light in order to bring out patterns that the artist hopes will inspire meditation about their historical and visual significance. 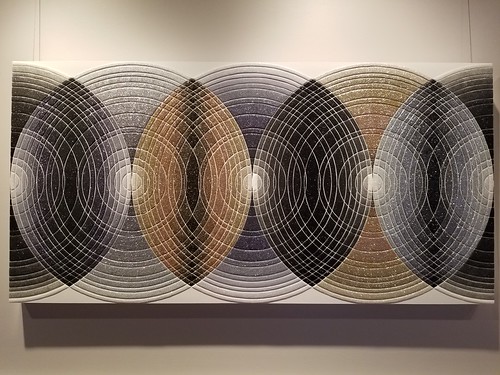