My neighbor Rose was lamenting to me earlier in the week that she hadn't yet seen Infinity War and her boyfriend wasn't interested in Marvel movies, so of course I did the selfless thing and offered to go with her as soon as possible. Heh. She wanted to see it in 3D, which I had not done yet -- I'm ambivalent about 3D, there are usually only a couple of scenes that it improves and I sometimes get headaches from the glasses, but the ending was great in 3D -- and Maddy got us passes, which was awesome. My previous points of irritation with the film remain, yet I'm still never bored and I just really love these characters.

After the movie, Rose came over to visit the cats and watch the Avengers press tour videos with me (Corden's Star Star Tour bus and Fallon's Marvel Bunch singalong are worth watching more than once). Then we had dinner, Maddy went out with friends, I went out to get gas since I realized on the way home from the movie that my tank was nearly empty, and Paul and I watched a couple of episodes of Billions since we're very behind this season. Here are some photos from Richmond's Lewis Ginter Botanical Garden last year since I never got around to sorting the orchids last winter when they were taken: 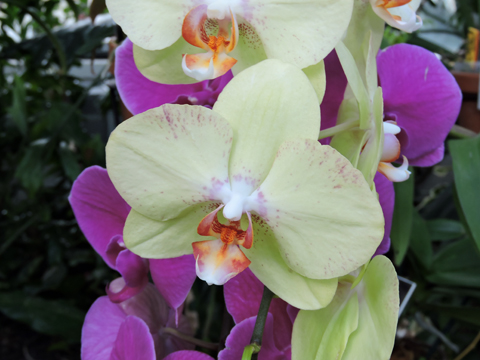