We thought about spending Saturday either at Lake Whetstone or at the Maryland Sheep and Wool Festival, but the weather was iffy in the morning and had some periods of pouring rain in the afternoon, so it was just as well we weren't ambitious about getting out early. We ended up going to Garrett Park, the former railroad town and first nuclear-weapons free zone in the United States that is now by its own bylaws an arboretum: 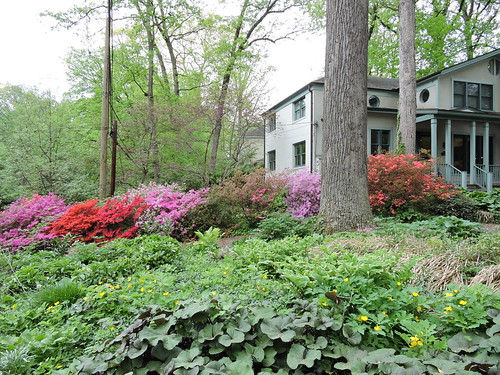 We stopped at Giant for cat food and tortilla chips, came home in the rain, had tacos for dinner for Cinco de Mayo, and watched the Kentucky Derby. Then we watched Fantastic Four: Rise of the Silver Surfer, which remains pretty terrible (it was at least largely a surprise to me, because I had blocked out just about everything that happens in it). Now we're watching SNL's cast of America's best guest comedians in the cold open and Donald Glover!
Collapse