Another quickie as I spent this very rainy Saturday being an absolute slug with Paul and Cheryl -- first we slept through most of the royal wedding coverage though we caught the end of it, then we watched The Road to El Dorado (partly because of things like this), then we had lunch while watching the reboot of Vacation (which is pretty terrible and sexist -- we were only watching for Chris Hemsworth, though I think the best scene is the Four Corners police battle -- and has a couple of nice cameos).

Then I dragged everyone out for half an hour for Pokemon Community Day to look for shiny Charmander before came in from the rain to watch Blackhat (yeah that was 100% for Chris Hemsworth), and then we watched my brand-new Blu-Ray of Black Panther. After Cheryl had to go home, we caught up on the season finale of Agents of SHIELD, which was surprisingly moving given how many times I almost stopped watching the show out of boredom or annoyance before this season.

Since I took no photos today, here are some of the New York Aquarium's seals and sea otters in the rain from last fall: 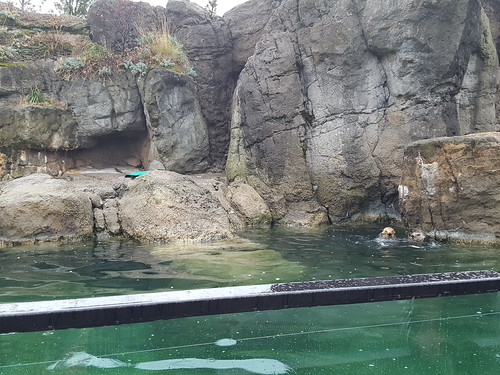