We had terrible weather on Tuesday, but I had a good day anyway because Adam and his childhood friend Emiliano, visiting the area from college in Mexico, decided it was the perfect day to see Deadpool 2, and since I had offered to take Adam to see that at some point this week anyway, we picked up the friend and all went to the movies. (It is equally hilarious on second viewing, in some ways even funnier in the second half.) None of us had had lunch before the movie, so we went to grab froyo and were going to come back to our house so we could go to College Park and collect Adam's things, but it started to rain so insanely that we bailed on that idea and watched The Lego Movie (which Emiliano hadn't seen) instead.

Adam took Emiliano back to the relatives with whom he's staying, we ordered pizza for Bitcoin Pizza day, and we have just watched the season finale of The Flash (too many shark-jumping moments to count and I'm 80% here for Harrison Wells so some Earth's version of him better be around next season) and the newest episode of The 100 (c'mon, Marcus, do NOT be flirting with other women even if you think it's to help Abby). Now we're watching Jon Stewart under Stephen Colbert's desk. The new plan is to pick up Adam's things tomorrow morning before he heads out to an overnight movie marathon with friends in the afternoon, so here are just a couple of photos of him with one of our cats and one of his oldest friends! 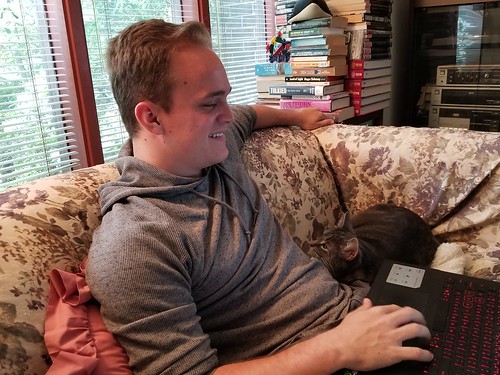