Paul and I spent a big chunk of Wednesday in College Park moving Adam's things out of the Courtyards, a momentous occasion in that our two kids each spent two years living there (and had pretty good experiences, though Adam says he has no nostalgia for his apartment). We made the mistake of not insisting that he bring some of his stuff here while he was commuting back and forth the past couple of weeks to see friends closer to home, so there was a lot to pack and clean and drag to the dumpster, but now it's all crammed in our basement until next fall, and we went to an extremely late lunch at Pho D'Lite before coming home.

Adam is spending the evening at a movie marathon with the high school friends with whom he has had such marathons for several years -- I believe he brought The Nice Guys. Paul and I had sandwiches for dinner since we weren't very hungry after our late lunch out, then we watched the season though hopefully not series finale of Timeless, which we missed on Friday. It finished before the Capitals beat the Lightning to earn a trip to the Stanley Cup final, huzzah! Here are a few photos of Courtyards so I remember how the public spaces looked. Adam was not in the mood for posing, but you can see and read about him on one of his adventures here! 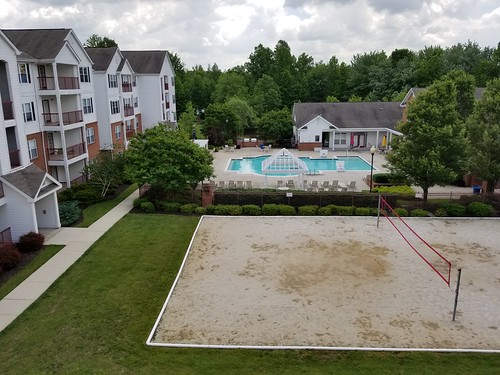