It was quite hot and muggy all day Saturday with periods of rain, so we tried to time our outings to periods when it was neither pouring nor sticky as glue out there. In the morning we did a bit of shopping and I met friends for a Ho-oh raid at the Starbucks near Giant, then we came home for sandwiches and went to Carderock. The canal there was full of frogs! Plus we saw a few turtles, lots of dragonflies, and a skink, and when we walked to the cliffs over the Potomac River, we saw a big black snake in the woods. 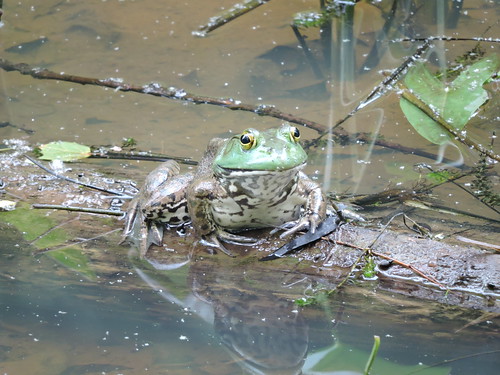 We came home and did a bunch of chores, ate kung pao tofu for dinner, and watched the 2018 Tomb Raider movie, which wasn't bad but wasn't very good despite how hard Alicia Vikander was trying; the script was a mediocre Indiana Jones daddy issues ripoff, and, despite a strong female lead, it barely even passed the Bechdel Test. Then we watched the Capitals-Golden Knights game, which was awesome, since the Caps won after leading all game (unlike the Nationals earlier who took 14 innings to beat the Braves)!
Collapse