Not an eventful Monday apart from screaming at the TV -- alternately the Supreme Court and the president -- though the weather was beautiful and I got to do at least a bit of happy screaming at night as the Capitals won another game in the Stanley Cup finals. I did some very boring work and chores, went to CVS and Giant around a Pokemon raid at Starbucks and dinner at California Tortilla which was having a chips-and-queso giveaway. We also watched the 4,396th episode of Supergirl this season dragging out the Reign storyline.

Here are some photos from the Hillwood Museum of some of the clothes of actress Dina Merrill, born Nedenia Marjorie Hutton (the daughter of Marjorie Merriweather Post and E.F. Hutton), who grew up in part at Hillwood and who died a year ago, including her wedding dress on display in her mother's bedroom and a bridesmaid dress worn at the wedding of one of her half-sisters: 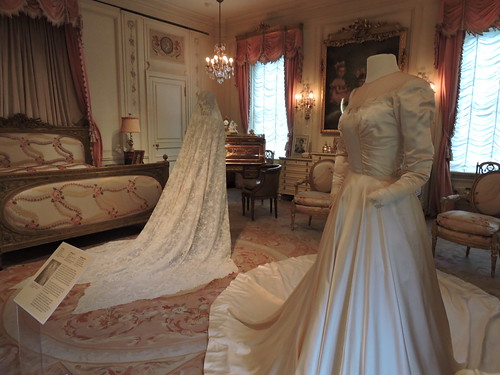